Gyotaku (pronounced something like "jo-taku") is an ancient Japanese art form in which prints are made by inking a fish and pressing rice paper on it. In Japanese, "gyo" means "fish" and "taku" means "print" or "rubbing." It's harder than it sounds.
- John Giearach

Jack Brown lived seven and a half years in Japan during the late seventies. During that time he fished, and learned the six hundred years old art of Gyotaku. Used originally to record impressions of fish, nowadays Gyotaku receives enthusiastic reception as a decorative and interpretive art form. Today fish rubbings and prints can be seen displayed alongside other notable pieces of art. 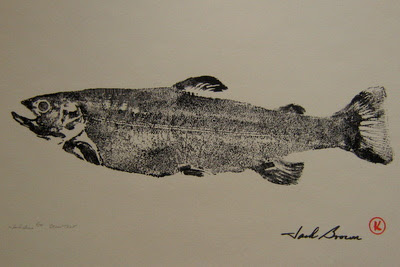 Jack sent me two absolutely beautiful prints: a brown trout and a steelhead. The fish rubbings made by Jack Brown are great gifts for fishermen. 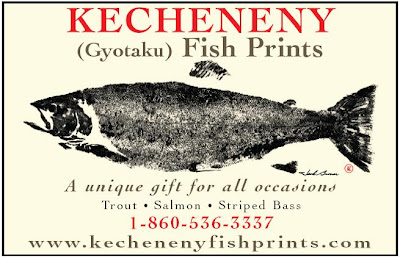