Colors of the Fall 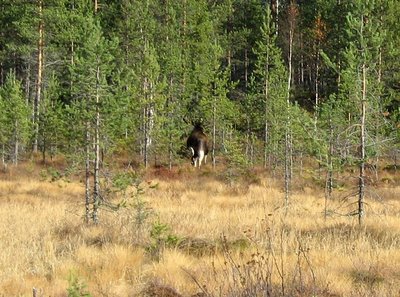 Kuusamo is a region in eastern Finland less than hundred kilometers south of the Arctic Circle. It has lot of wild life as this moose that crossed the road just before us when we were heading towards Kiutaköngäs. Luckily the road was bad and we were doing only 50 km/h (31 mph) so I had no problem stopping the car before this magnificent animal. It was big and had a very good rack, but we were too slow with the camera.

Kiutaköngäs is name of about hundred meter rapids/falls stretch of Oulankajoki. This river goes all the way down across the border to Lake Paanajärvi in Russia. Below is a picture of Pikkuköngäs (“Small Falls”) just above the Kiutaköngäs. 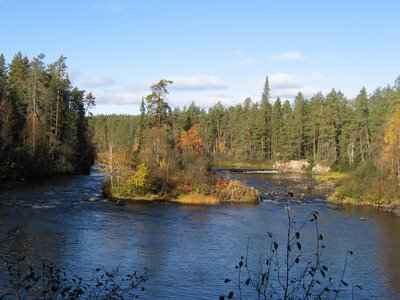 The Brown Trout of Paanajärvi is possibly most known trout variant in Finland. Paanajärvi Trout are big (2 to 5 kg or 4 to 11 lbs are most common) and jump thru Kiutaköngäs Falls to spawn in the upper stretches of Oulankajoki. Paanajärvi Trout is fished in rivers Oulankajoki, Kitkajoki and Kuusinkijoki. These fisheries are very popular and a subculture of Trout Fishing is formed to Kuusamo around these rivers and Paanäjärvi Trout. 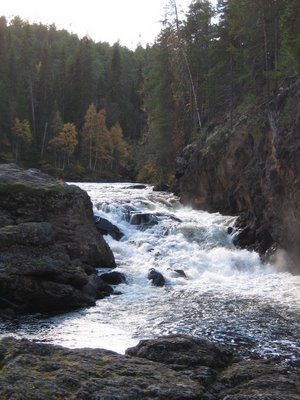 We had a week of family vacation, but Thursday afternoon was my time off – a time to go fishing. I had grayling in mind, and I had been planning to go to a small stream. I found out that I had done my homework poorly. When I talked to the manager of the fishery, he informed me that all streams in his region were closed until next summer. I had knew beforehand that the great rivers of Kuusamo (Oulankajoki, Kitkajoki and Kuusinkijoki) were closed but I was under impression that some of the small ones would be open for fishing.

After initial disapointment I crafted a plan B and headed towards Poussujoki. It is small upper fork of great Iijoki river system. Iijoki is flowing from Kuusamo to Gulf of Botnia, some 340 kilometers (211 miles) southwest.

Thursday morning was very cold. There was ice at the shores of small lakes. At midday my thermometer showed +5 degrees Celsius (41 F) for air temperature and the water was +7 degrees Celsius (44 F). There was no visible bug/fish activity to speak of, so it was a day for nymphing. 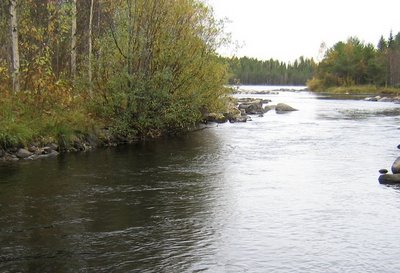 In the course of afternoon, I managed to land three graylings and failed to set the hook for about same number of other fish. All of the graylings were small, around 25 cm or 10 inches, and all of them accepted Red Tag pattern. It was not what I whould call a good day if you count the fish and the coldness, but I enjoyed every secod of it. 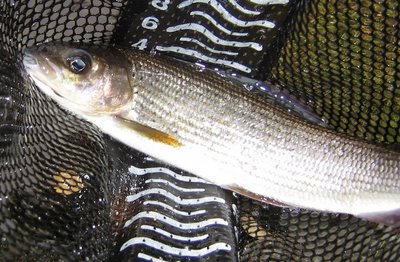 Friday morning we left Kuusamo and drove back home. There had been first snowfall south of Kuusamo and the land was covered in snow. It was really beatiful sign of coming winter. 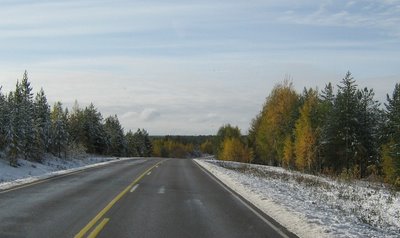 Back home, about 400 km (250 mi) south of Kuusamo, the leaves are still more green than yellow. It is like a step back in time.

Right now I am busy checking the other blogs. It looks that Wyatt from Flytimes is in Yellowstone. Can’t wait to see the pictures from there!
Posted by opax at Saturday, September 30, 2006